Oh man. I’m so excited for the upcoming semester.

And while I’m excited for what’s ahead, I wanted to write a little post about this summer, about the little moments that have become memories.

I’ll think of reading so much and learning so much for my craft. This summer I truly discovered the complex joy that is literary fiction.

I’ll think of the week I spent with my best friend up in South Dakota and Iowa, in which we talked and drove and talked and bid on pies and ate s’mores and went on a wagon ride to which I said, “It’s like Kilimanjaro Safaris of South Dakota!”

I’ll also think of the soundtrack Joseph & The Amazing Technicolor Dreamcoat and miles and miles of corn fields.

I’ll think of finally seeing Waitress after more than a year of obsessing over the soundtrack and the story. Sweet smells (that lobby, though!), sweet pie, sweet experience.

Side note: when can I see another musical?!

I’ll think of trekking to the local library almost every day to write fiction (hopefully the start of my thesis…ahh!) among the books, huge wireless pink headphones spitting the newest Carousel revival soundtrack into my ears, the songs “Mister Snow” and “If I Loved You” always on repeat. So soothing. So nuanced. So great.

I’ll think of finally writing more for this blog after months of being stuck.

I’ll think of The Handmaid’s Tale and Mad Men, the two shows I watched religiously over the summer. Elisabeth Moss is a master, and the characters she portrays are incredible.

Side note: from now on, whenever I’m feeling a little glum/not confident when it comes to my work, I’ll ask myself, “What would Peggy Olson do?” She’s amazing.

I’ll think of the sleep I lost because I stayed up late watching The Handmaid’s Tale and Mad Men.

I’ll think of my re-discovering the gloriousness that is Ben & Jerry’s Phish Food (is that how you spell it?!) ice cream.

And, finally, I’ll think of spending time with the people I love most.

It was a good summer, indeed.

One of the most cherished past-times of summer has got to be the quintessential road trip. It’s classic, it’s perfection–not-so-good-for-you-food, quirky stops along the way, and activities to help pass the time on the road.

My little family (my mom, my sister and I–we’re the best of friends) took to the road a couple of days ago and had so much fun. We made two fun little stops and did some ordinary shopping, rounding the day out with some horrific singing as we made our way back to where we started. Even though the outing could have been dubbed “normal” and “uneventful,” the day proved to be full of fun little moments that made for a memorable day.

Our plans took us to Oklahoma City and surrounding areas. I love the atmosphere in OKC; downtown is hip and kind of funky, and its suburbs are filled to the brim with shopping and dining. Our first stop was for breakfast at Waffle Champion in downtown OKC–as soon as I put my first bite of classic waffles with cinnamon cream cheese syrup and a sprinkle of graham cracker crumble, I knew I had experienced a taste of heaven, nirvana, El Dorado, you name it.

Here’s a picture of my platter so that you may drool and experience a plethora of jealousy: 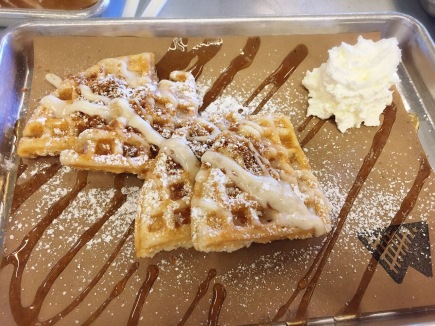 As Leslie Knope (Parks and Recreation) once said, “We need to remember what’s important in life: friends, waffles, and work. Or waffles, friends, work. Doesn’t matter, but work comes third.” Waffle Champion assured this outlook on life, and I plan to make many more trips to experience the deliciousness all over again.

Our next stop was a complete surprise–a gas station lovingly named “Pops” located in Arcadia, Oklahoma, along the original Route 66. Its name is derived from the fact that over 600 flavors of soda are sold within its walls. A statue of a classic soda pop bottle sits in front, further contributing to the charming theme.

My family loved this place. So classic, so cute, and so nostalgic. Here are some pictures:

The rest of the day was spent shopping and experiencing little moments that made the entire clan smile: comparing our shopping excursions to that one episode of Gilmore Girls in which they window-shopped, stumbling upon a Disney Store outlet, and singing Disney tunes at the top of our [my] lungs as my mom’s Expedition lumbered on down the road.

Sometimes summer vacation doesn’t have to be chock full of big moments to be special and fun. Sometimes you just need an “ordinary” road trip to produce an extraordinary day.

Summer is oh so close, my friends.

I am so looking forward to strolls in the steamy weather, a few Sno Cone runs, reading by the pool, and other leisurely seasonal activities. I’m also ready to “get my life together”: working out, resume constructing, portfolio pumping, and organizing my plethora of stuff. While I plan to get down to business (to defeat the Huns?), I also plan to have a little bit of nonsensical fun. Here are some of the things I might attempt to do this summer:

There you have it! Summer is the time to have some good old-fashioned fun. Feel free to use my list above (which I just totally made up on the spot) or come up with some of your own fun-seeking ideas.

Have a sunshiny day, my friends!

✨🍁🍂🍁🍂🍁🍂✨ . . . . #autumn #fallleaves #writer #amwriting #writer #mfacreativewriting #mfa
Hey here’s a pic of my desk at the moment 🍂🍁And yes, that’s just the book jacket; the actual book is tucked away in my backpack. 🙈 . . . . #gradstudent #mfa #mfacandidate #mfacreativewriting #writer #amwriting
I attended my first homecoming as a person truly coming home to my alma mater, and the whole experience was just wonderful. 🍁🍂🍁 . . . #swosu #alumna #writer #amwriting #fall #autumn
I will never not love how Ellie makes herself at home in my [parked when the photos were taken] car. 🚙💖 . . . . #shihtzu #shihtzusofinstagram #mybestfriend #mybestbud #writer #mfa #fall #autumn
I made this bundt cake for @creatingclw’s birthday, and it was too pretty (and tasty) not to post. 🎂 💖🥳 Courtney, I hope you had the best day because you deserve it. 💖 . . . #birthday #baking #gradschool #mfa #creativewriting
I try to get my life together on Sundays. Sometimes I succeed. And sometimes my life ends up looking a lot like my desk. 🤓😆 . . . . #sundays #gradstudent #writer #amwriting #mfacandidate #mfacreativewriting